The Church of Saint Michael the Archangel, now located in the North side of Piazza San Nilo, was founded between 796 and 817 by the abbot Gisulfo together with the Monastery of Sant’Angelo, using the materials from the preceding Roman buildings of the Pagus Vallis Luci1. Between 948 and 985, the abbot Aligerno had the monastic complex restored to receive Saint Nilus the Younger2, who between 979 and 994 had it extended and adorned3. Between 1011 and 1022, Sant’Angelo became again a Benedictine dwelling and the abbot Atenolfo had it again extended and painted1-4. Once again in 1460, the Church was enriched with a series of frescos of which only survived a Madonna with Child and other little fragments in the current sacristy. After the Sannio earthquake in 1688, the Church obtained a new vault, new buttresses and baroque decorations. In the 1700s, the Chapel of Saint Joseph was added to the Church. In the second half of the 19th century, it was built the canonical house which caused a significant demolition of the three original apses and the building of the current apse. From the beginning of the 20th century, the Church was subjected to a long series of changes, due to the World Wars and other seismic events which caused it to acquire the appearance we see today. 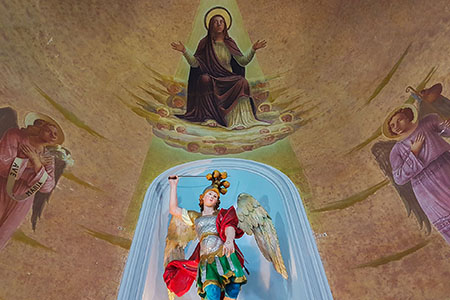 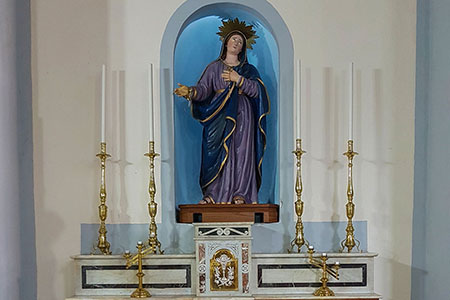 High altar of Our Lady of Sorrows 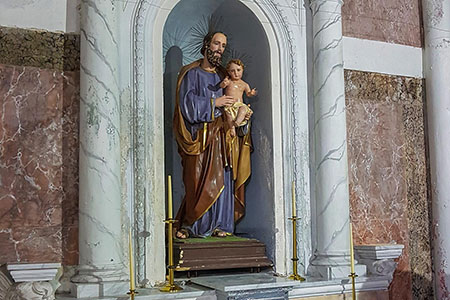 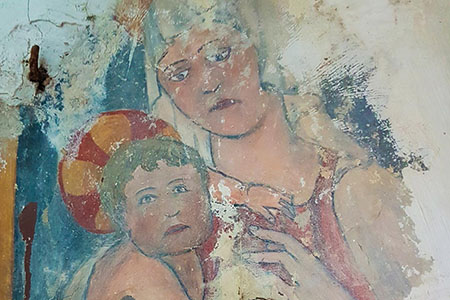 Surviving fresco of the sacristy

The structure has a longitudinal plan which on the exterior presents a simple white gabled facade, decorated with simple light grey cornices that follow its perimeter and ideally divide it into two registers. The portal is flanked by two Doric pilasters on two levels, which support a roman arch encasing a simple lunette. Underneath there’s a window with internal iron decorations. Above, there is a rose window which represents the venerated statue of Saint Michael the Archangel, framed by two Doric columns with a lowered arch. On the right, placed slightly forward, there is the bell tower divided into four registers by four cornices. The central register presents on two sides, circular holes, which each contain an eight-pointed contoured star. The last register is longer than the other three, it has an aperture with a round arch on each side and contains three bells. 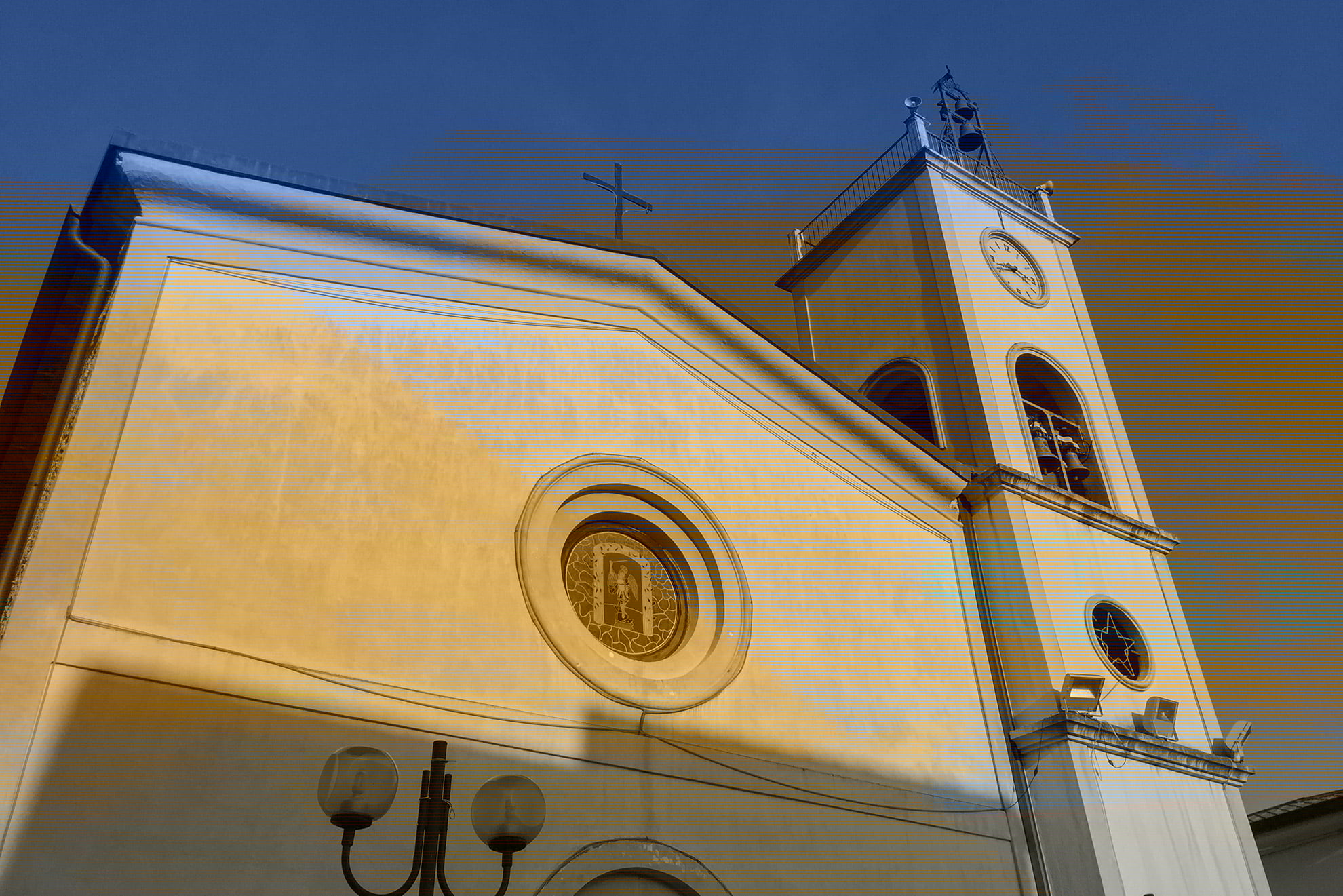 The internal space is composed of a single apsed nave which is divided into three rectangular spans by eight pillars. The church is decorated with numerous paintings made in 1955, characterized by a Neoclassical style. The pillars show various geometrical decorations with floral patterns while the ceiling displays a painted ceiling coffer. The apsidal arch of Saint Michael is supported by two marble columns with smooth shafts and Corinthian capitals from the Roman age while the apsidal basin contains a vast painting, which represents the Virgin surrounded by Angels on top and the Archangels Gabriel and Raphael in the lower part. The main altar was built in 1975, thanks to Caterina Rossi after the demolition of the preceding Tridentine altar. On the left side of the last span there’s the Chapel of Saint Joseph that contains a beautiful Neoclassical style altar covered with polychrome marbles. Lastly, on the right side there’s the high altar, dedicated to Our Lady of Sorrows which was built in 1933 in memory of Benedetto and Maria Civita Di Cicco. 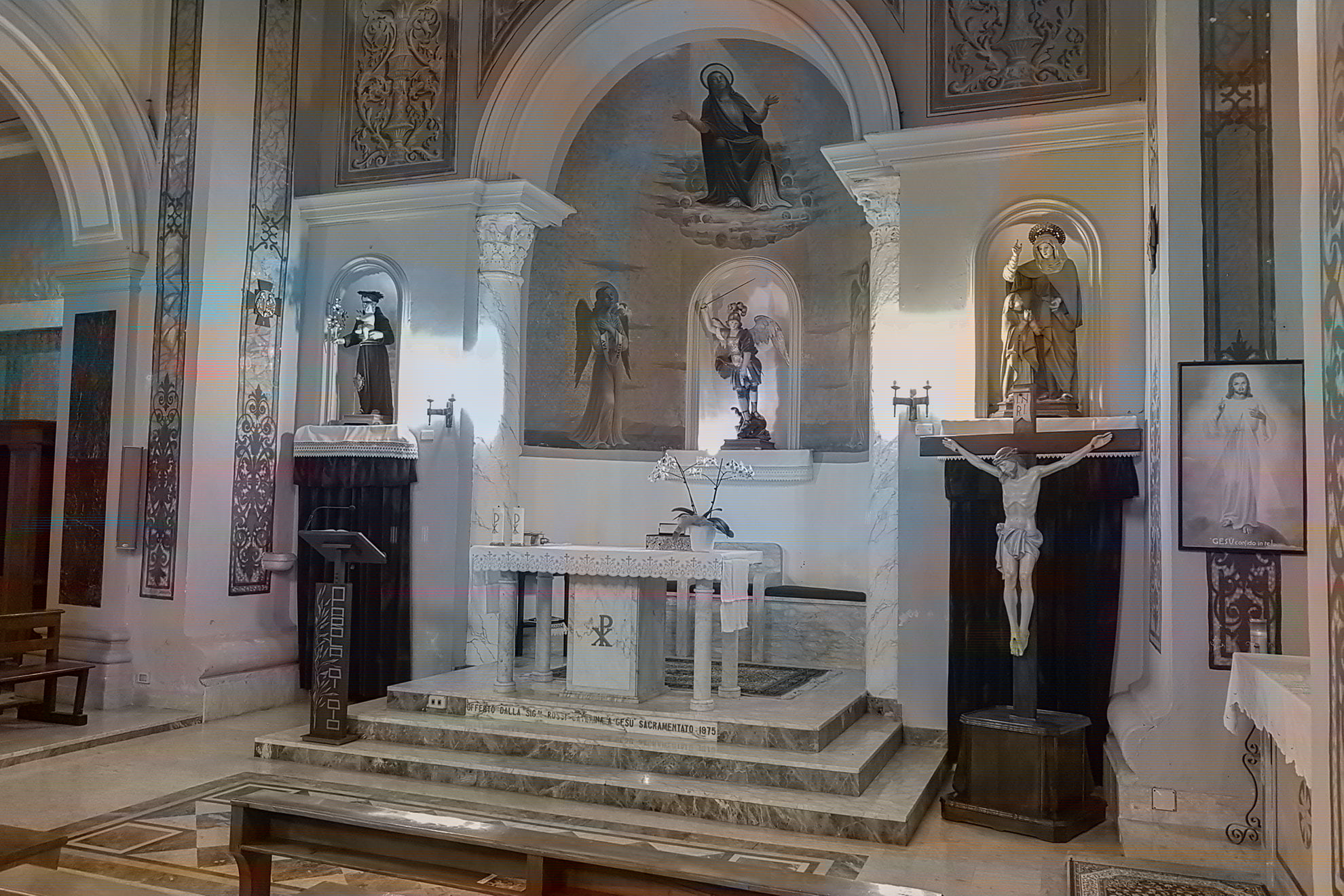 Statue of Saint Michael the Archangel

The statue of Saint Michael the Archangel, placed inside the niche of the apse of Valleluce’s Church, is the main sculture venerated on its inside and undoubtedly the finest one. It is made of wood, it is 55,12 inches tall and is undoubtedly the work of the Neapolitan wooden sculpture workshops of the 18th-19th century. The Archangel Michael is represented with an elegant contrapposto and is caught in the moment of the victory on the Devil. It looks like he’s just landed from a flight, his figure appears light and his gestures graceful. He’s wearing the *pludamentum* with a feathered helmet, a pair of sandals and on his left shoulder he’s wearing a flowing red cloak which flutters to his right. In his right hand he’s holding a thin sword while with his left hand points at the defeated Devil, who is portrayed as a canine looking beast. 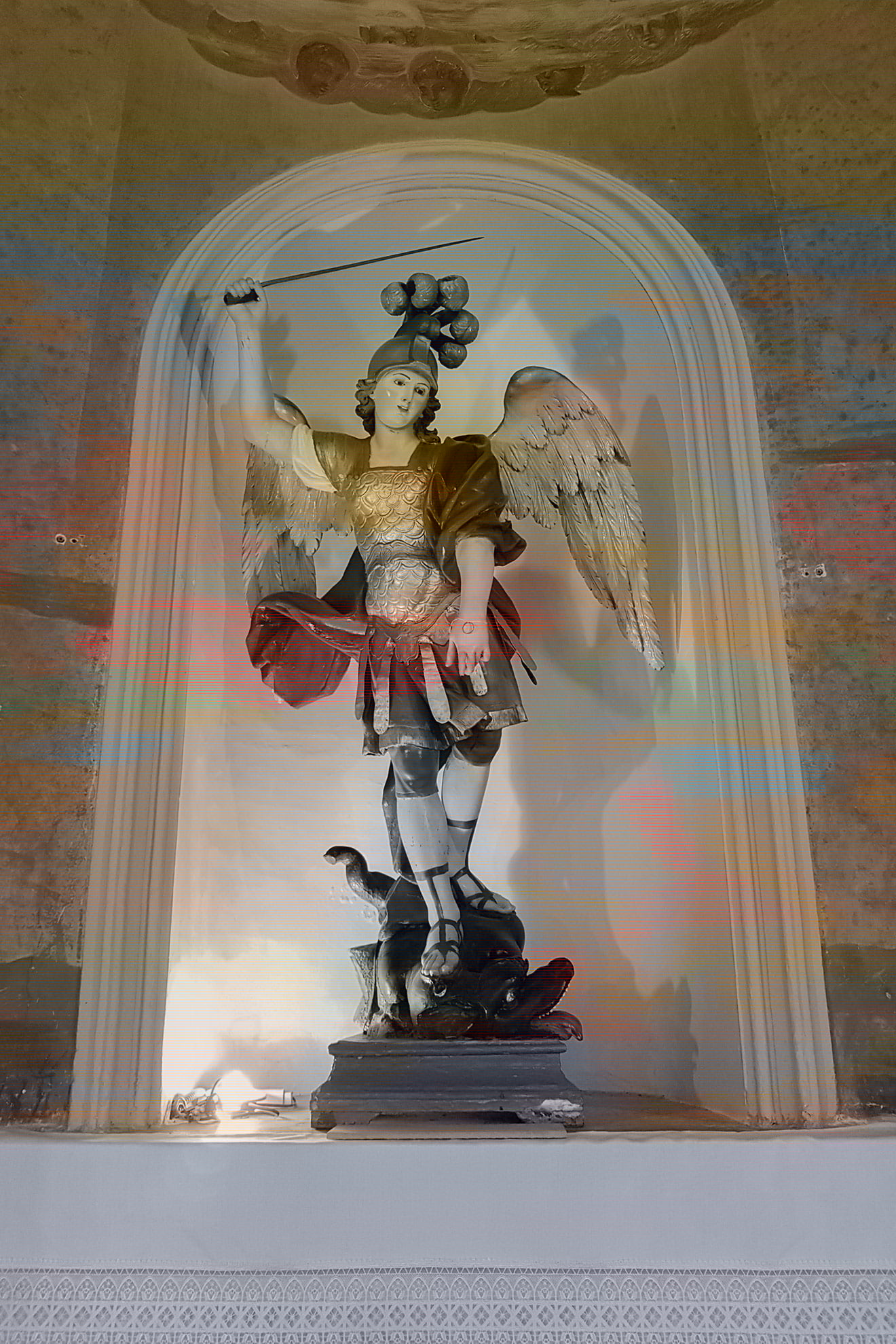