A man of great faith arrives in Valleluce who revolutionizes everything.

Saint Nilus was born in Rossano Calabro around 910 by one of the most important Greek families of Calabria2, with the name of Nicholas. He was a long-awaited by his parents, who put him at an early age at the serves the Cathedral of Rossano, where he learned how to read and write. Left as an orphan a short time later, he was looked after by his elder sister who was already married, who died when he became a teenager. In those years he married a humble girl with whom he had a daughter, but after a trip to the "Mercury" region, he was inspired by the observance of the monks of the area and decided to definitively devote himself to the monastic life. In 940 he consecrated himself in the Monastery of San Nazario in the Principality of Salerno, located outside the domain of the Byzantine Greeks1. Following the Arab invasions at the end of 978, Nilus decided to leave his hometown and wander North with the desire to get as close as possible to Rome, because he was attracted by the Latin civilization3.

In 979 Nilus arrived with about sixty confreres in Capua where he was received by Prince Pandolfo I Capodiferro, who urged the abbot Aligerno of Montecassino to grant him one of the cellæ of the Land of Saint Benedict. The abbot welcomed him joyfully in his abbey with the whole Benedictine community and entrusted him with a cella that could be prepared for the Eastern Liturgy, the Monastery of Sant'Angelo in Valleluce. Nilus arrived there with his Basilian community, accompanied by Aligerno himself and his main brothers1, on September 26 of the same year3.

Picture: School of the Abbey of Grottaferrata, Saint Nilus the Abbot, Valleluce, Sacristy of the Church of Saint Michael the Archangel. 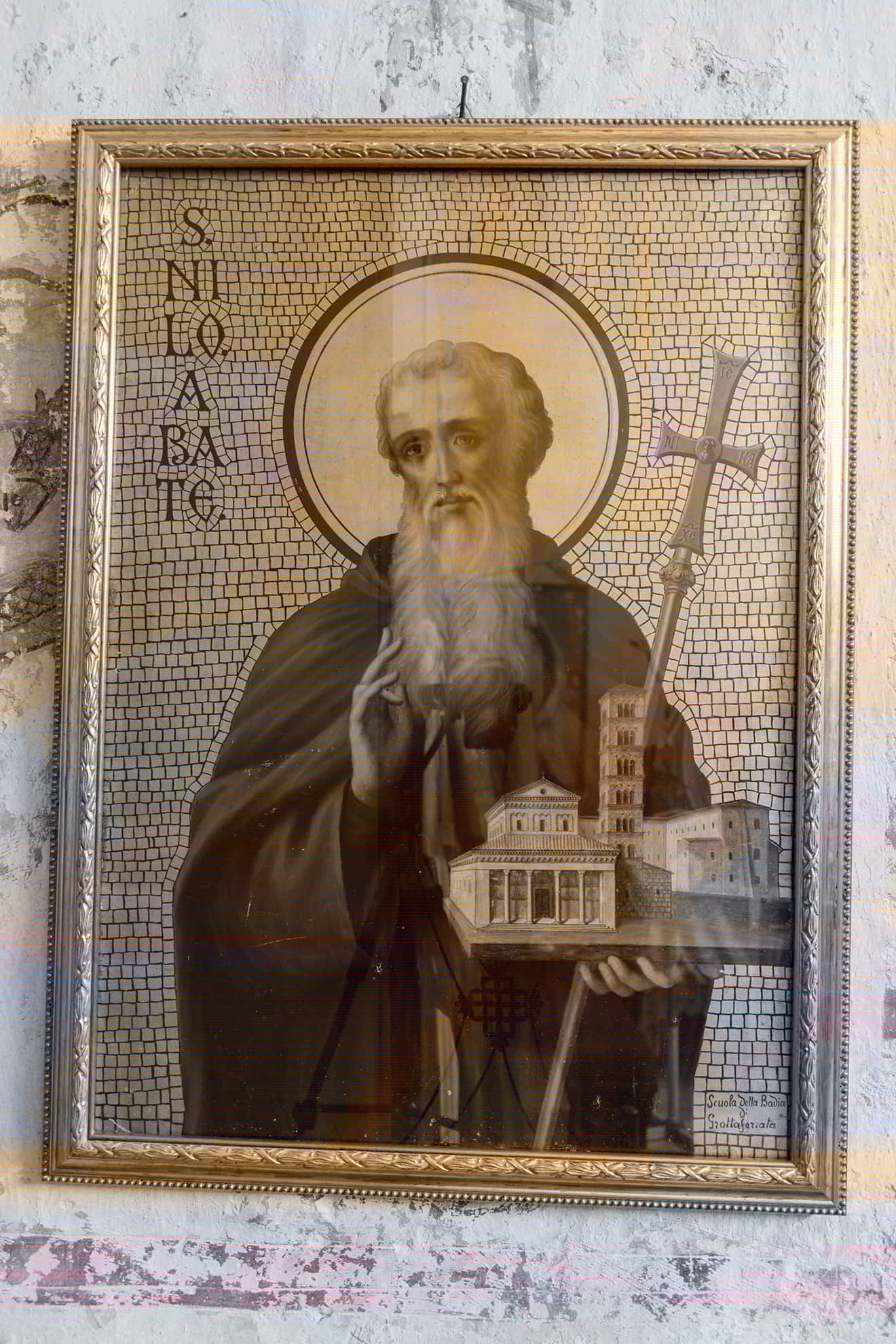 There he gathered the confreres scattered in the monastery and educated all his followers to the Greek-Byzantine rite. He restructured the church of Saint Michael the Archangel and enlarged the monastery3, also giving life to a scriptorium, used by calligraphers, which produced various important codes4. In Valleluce he received humble and aristocrats who came to invoke mercy, advice and protection3. He also received a visit from Saint Adalbert, the future bishop of Prague, who was sent by him to the Benedictine monastery of the Saints Bonifacio and Alessio on the Aventine Hill. In Montecassino he presided over a Mass in Greek language and dedicated himself to the composition of hymns, one in particular to Saint Benedict1-4. The Basilian and the Benedictine community lived together in a harmonious cultural and religious exchange4. 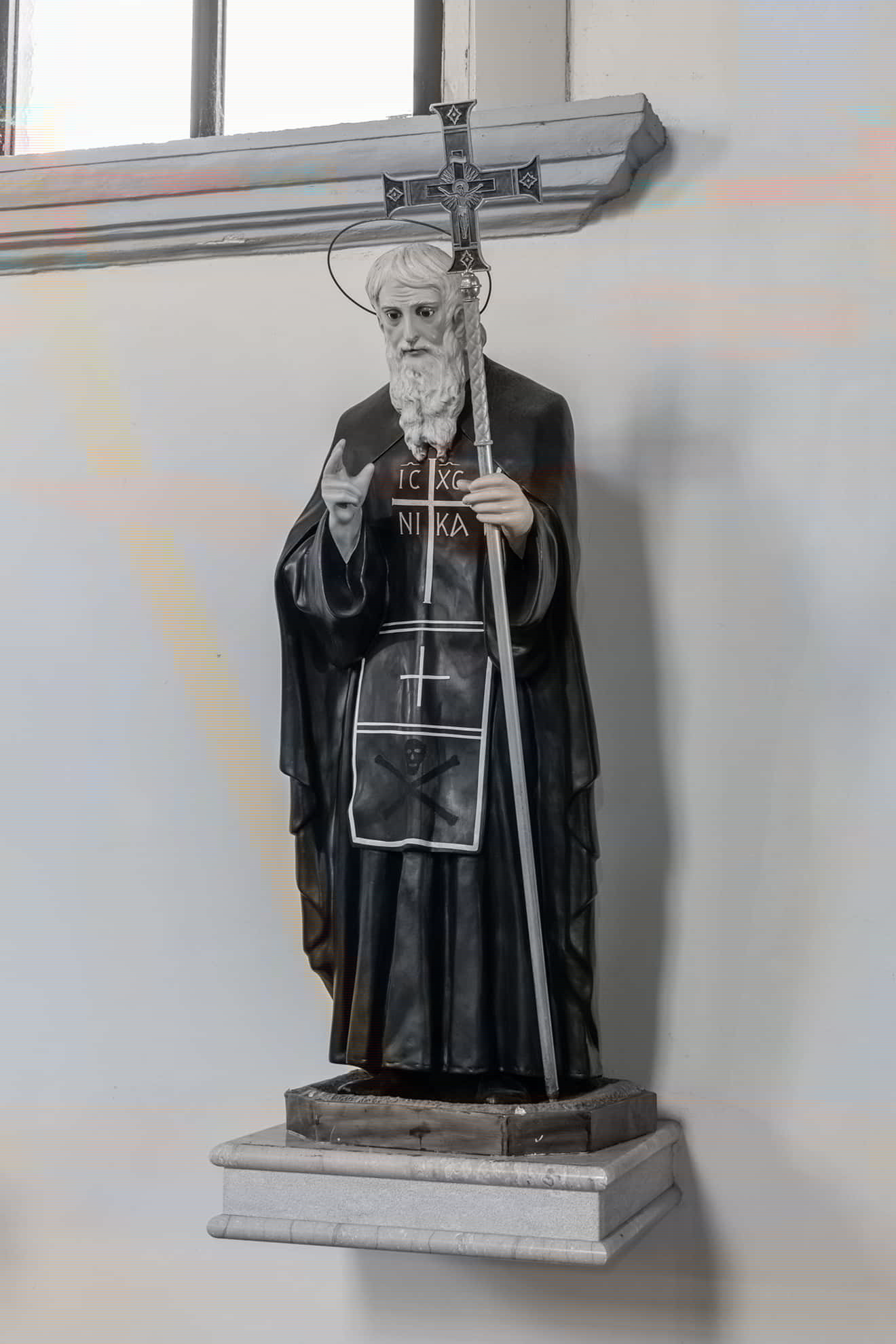 After about 15 years (994), the number of brothers increased and the cella of Sant'Angelo reached a high level of prestige, notoriety and prosperity. Aligerno, who died on November 23, 985, was succeeded the following year by the abbot Mansone, who neglected the observance of the monastic rules and enjoyed the wealth that the monastery had. As a result, even the Benedictine and the Basilian communities from that moment began to suffer from this decline. Indeed, some monks in Valleluce became unobservant of the precepts and negligent in the Divine Liturgy1. Nilus therefore, abandoned the cella of Valleluce embittered with his most faithful members, in search again of an uncontaminated place that he will find in Serperi (now Serapo) near Gaeta1-3.

Picture: Commemorative plaque of the Millennial of Saint Nilus the Abbot, placed in Piazza San Nilo. 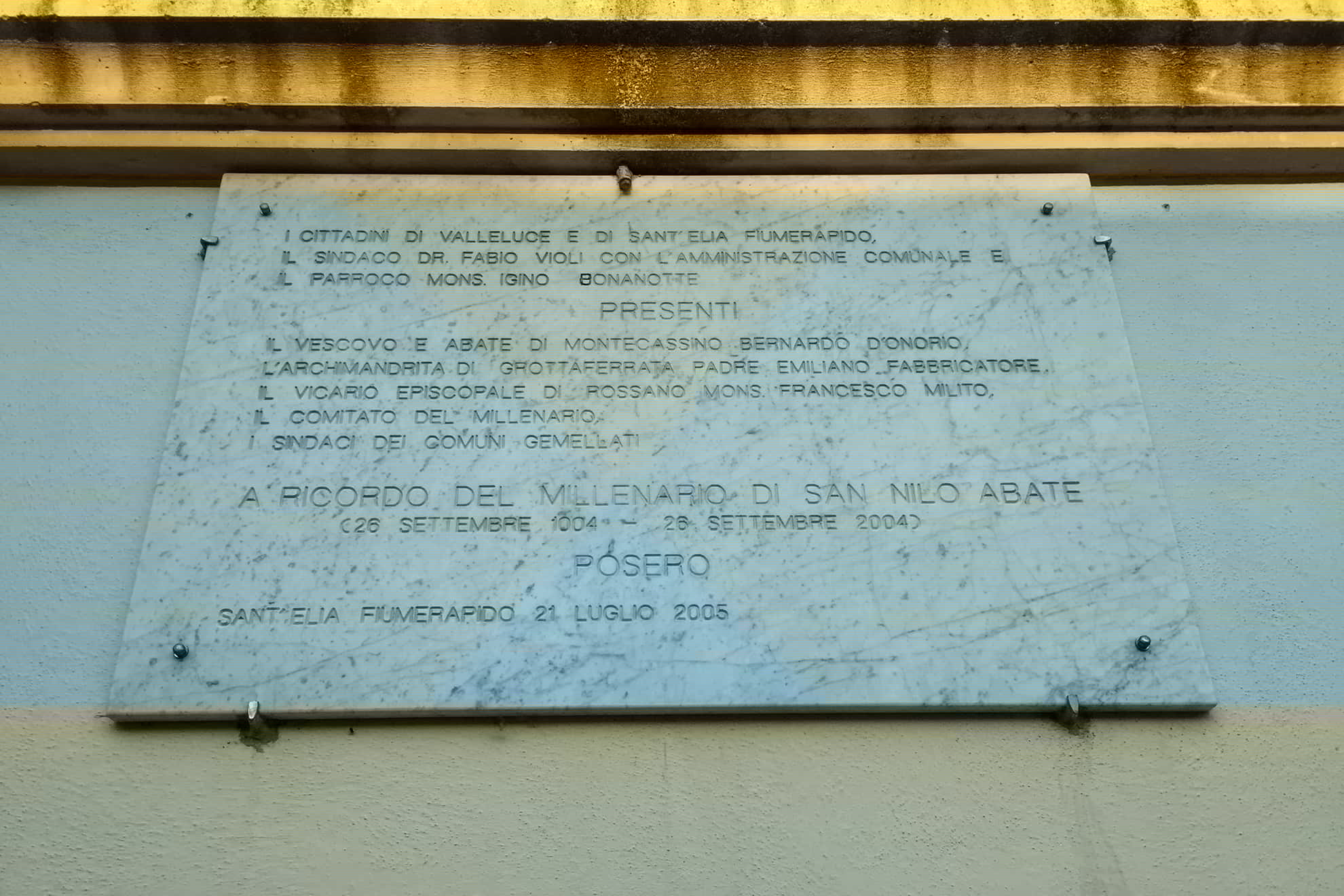