The domains of the Monastery of Sant’Angelo.

From its foundation until its closure between 14431 and 14612, the Monastery of Sant’Angelo exercised an important economic, spiritual and pastoral role within the Land of Saint Benedict. The tangible testimony of this function is the dense network of dependent churches, founded by the Benedictine of Valleluce throughout the territory of the abbey of Montecassino. Each one of them was marked by a specific function. They were built very often in places originally inhabited by the Romans, reusing the materials of the previous structures3. Unfortunately, most of them have been lost over the centuries, but some of them have survived. 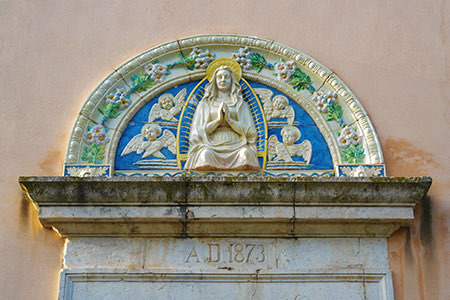 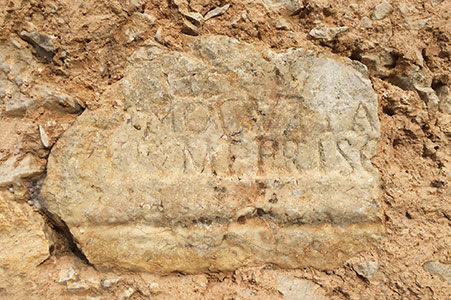 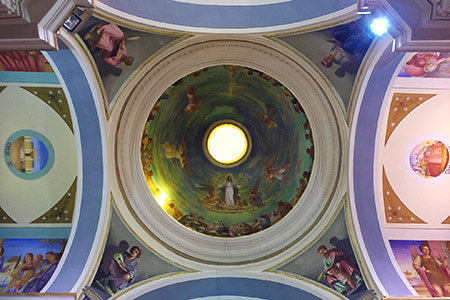 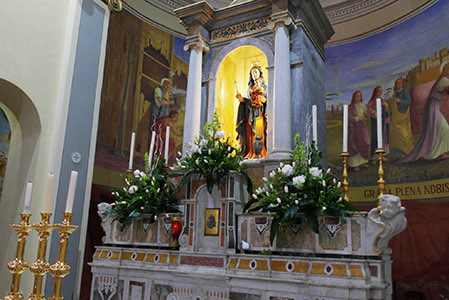 Detail of the main altar 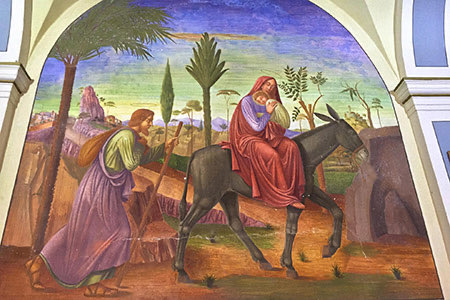 “Flight into Egypt” by Bizzoni 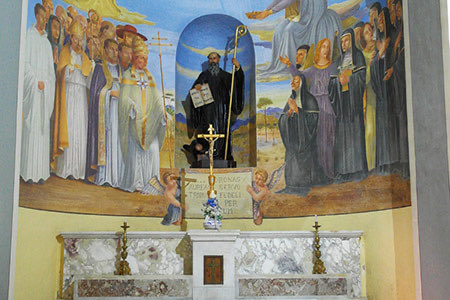 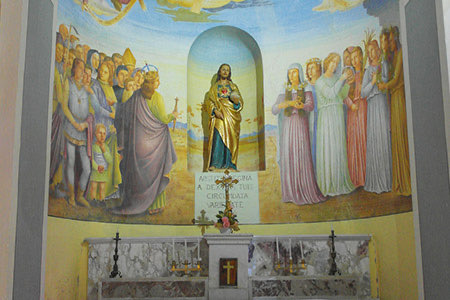 Altar of the Sacred Heart of Jesus 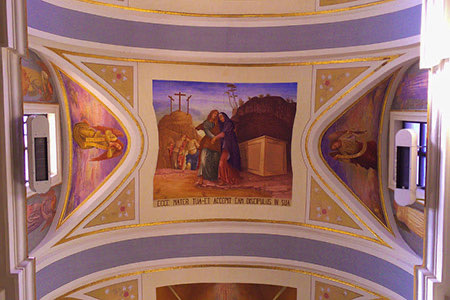 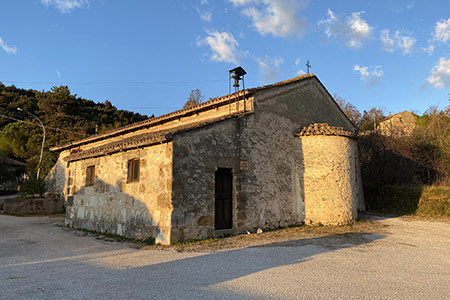 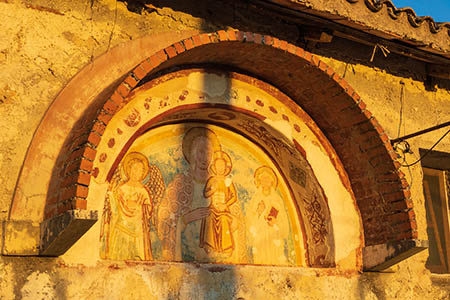 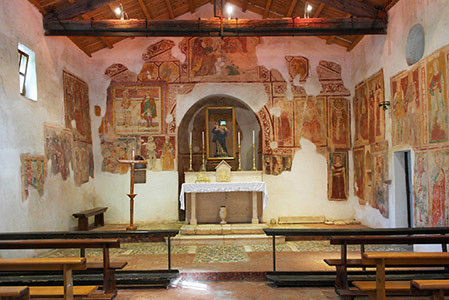 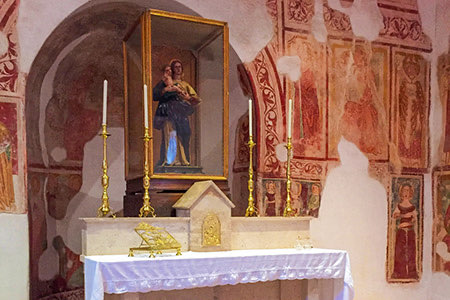 Detail of the tridentine altar 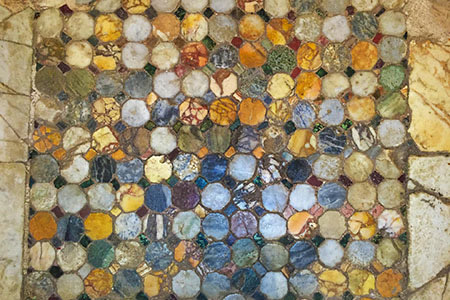 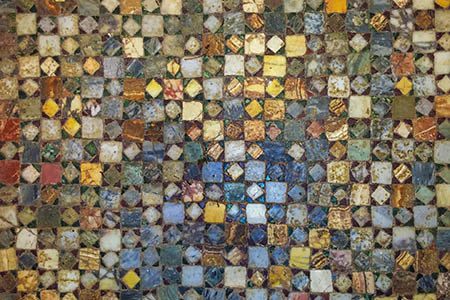 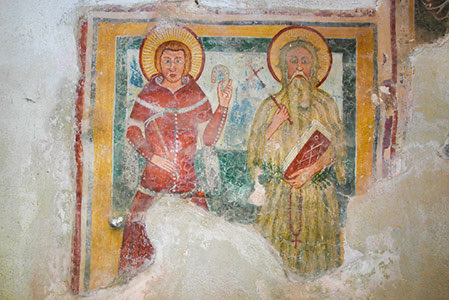 One of the frescos in the presbytery 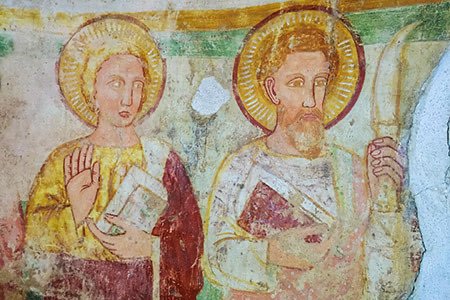 Detail of a fresco in the apse 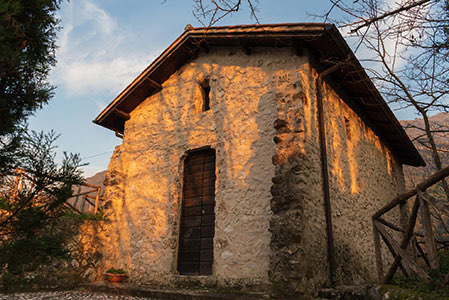 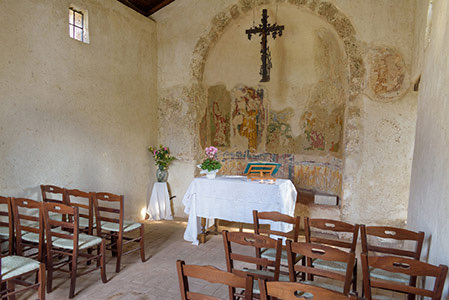 Detail of the “Madonna and Child”

The Church of Saint Mary of Indulgences was founded at the beginning of the 9th century in the locality of Casalucense in Sant’Elia Fiumerapido. The Benedictines used to come to this place to announce the Indulgences that were granted each time to people. Originally, the Church was built in the form of an aedicule, but starting from the 14th century, it was expanded and restructured many times thanks to the faithfuls. In 1840 two lateral apsed naves were added. In 1893 the vault, the dome and the pendentives were frescoed by the painter Enrico Risi from Sant’Elia. In 1957, thanks to the abbot Ildefonso Rea of Montecassino, the Church was enriched with the frescos of Giovanni Bizzoni which represent the episodes of the life of the Virgin like the Birth, the Presentation at the Temple, the Marriage, the Flight into Egypt and the Marriage at Cana. The abbot also raised the Church to the dignity of Marian Diocesan Shrine, which since 1991 has been kept by the Franciscan Friars of the Immaculate Conception5. 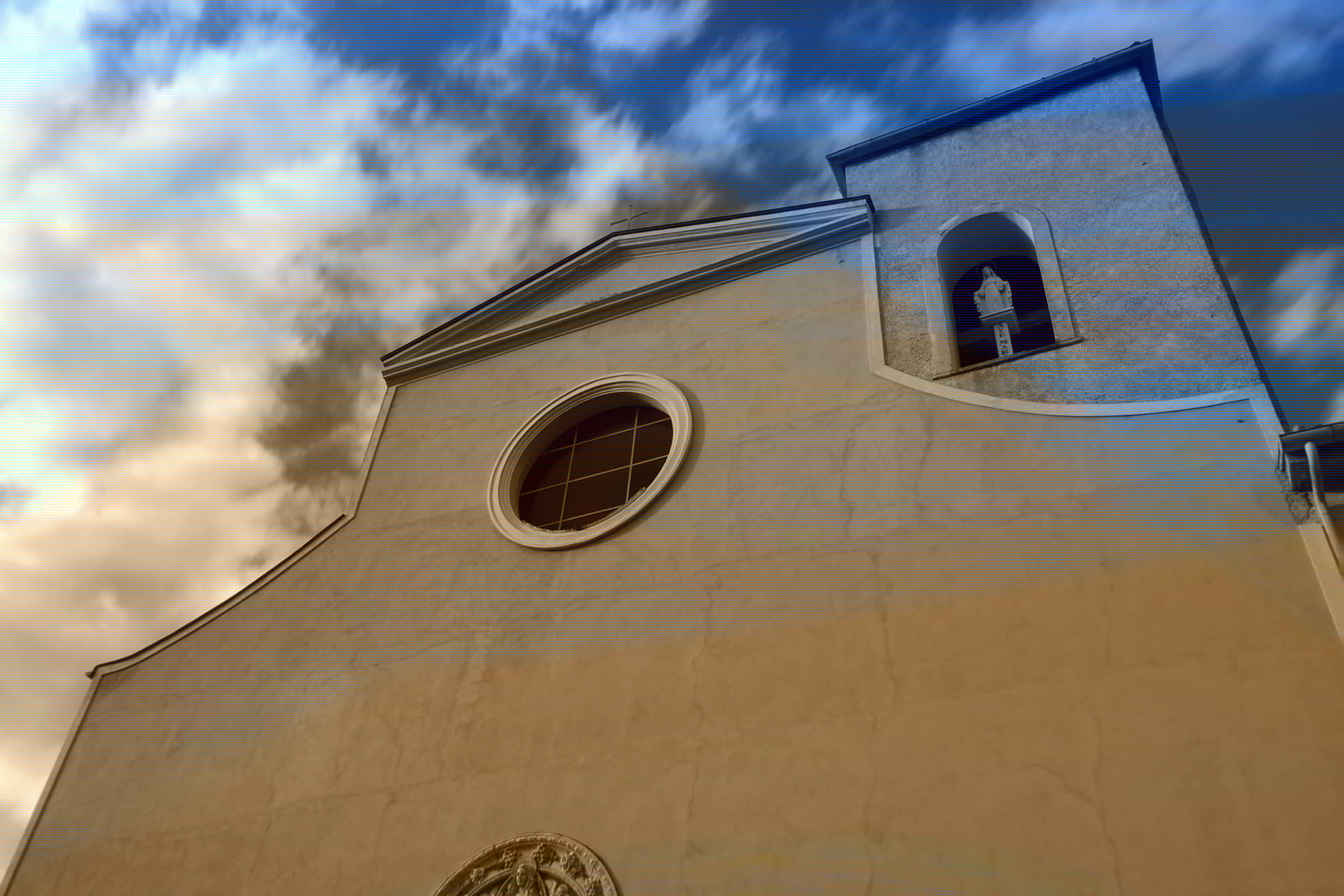 The Church of Saint Mary Major was built between the 12th and the 13th century in the homonymous locality in Sant’Elia Fiumerapido. This precious medieval Church in Romanesque style, served as a resting place for the Benedictines who used to travel between Montecassino and Valleluce. Its structure, with a single apsed nave, presents the portal on the right longitudinal side which is surmounted by a magnificent frescoed lunette with the Madonna and Child between the Saints Michael and Benedict. The interior is decorated with extraordinary series of frescos from various centuries, some of which are characterized by a Byzantine style. In these paintings there are represented various iconographies like the Annunciation, the Majesty and Christ Pantocrator6. The presbytery has an exceptional pre-Cosmatesque floor mosaic made with polychrome marbles7. The graceful wooden sculpture of the Madonna and Child, datable to the 17th-18th century, is kept inside a case placed on the original altar6. 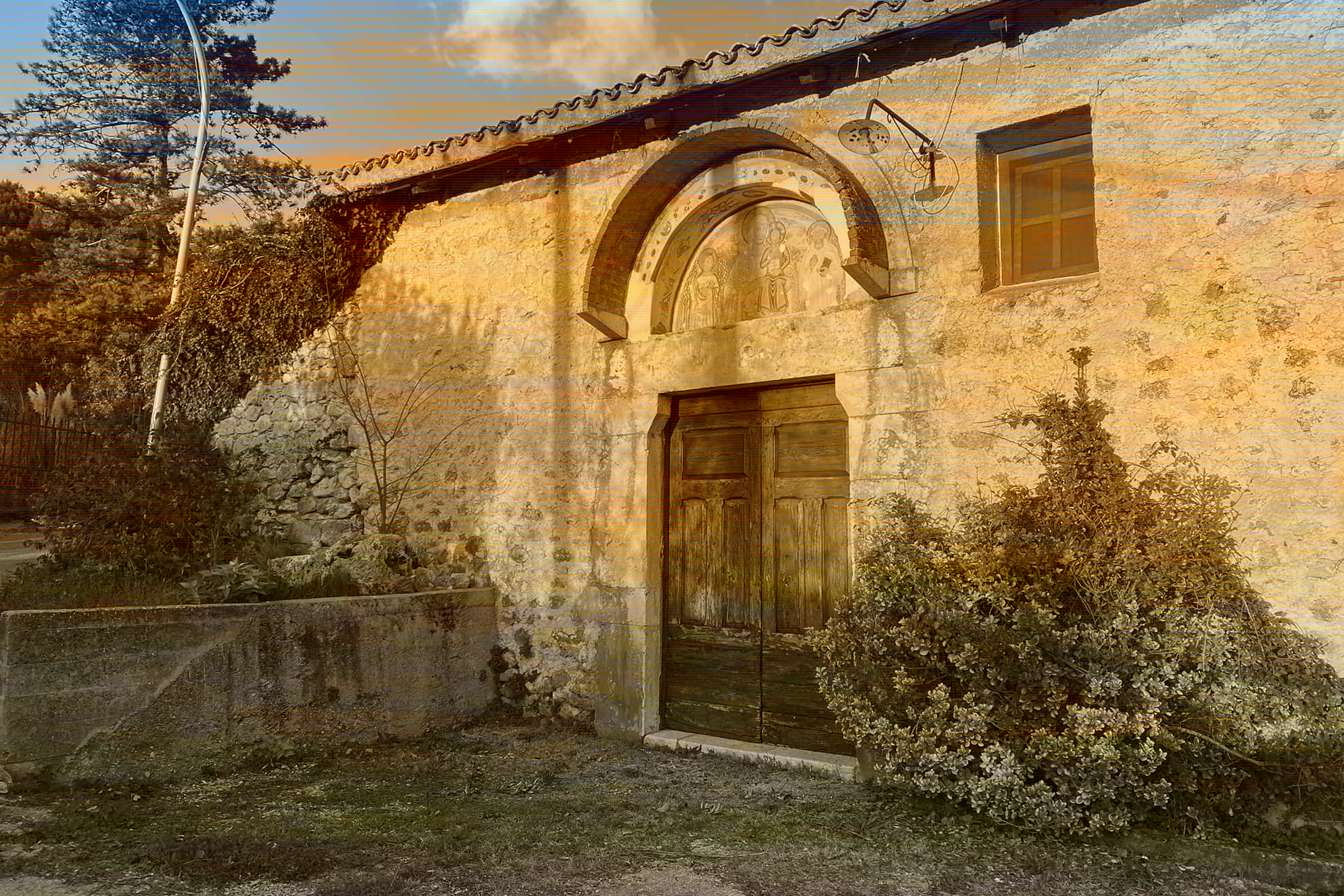 The Chapel of Saint Mary of Palombara was built between the 12th and the 13th century in the Croce locality in Sant’Elia Fiumerapido. Located in the middle of two important religious communities, Saint Mary Major and The Most Holy Annunciation, it favored the spiritual recollection of the faithfuls residing in the countryside. Its simple structure, with a single apsed nave, reflects the typical characteristics of the so-called “rural” churches. The gabled facade is framed by two lateral buttresses while the portal is formed by two piers that both end with a corbel. Inside there are five small windows, one in the counter-facade and two on both side walls and at the bottom of the right side there’s a secondary door. On the back wall and in the apse there are the surviving frescos, probably from the 15th century of the Benedictine school, in which we can distinguish figures of saints in different registers on the various layers of fresco. On the left the figure of the Madonna and Child stands out inside an almond shape8-9. 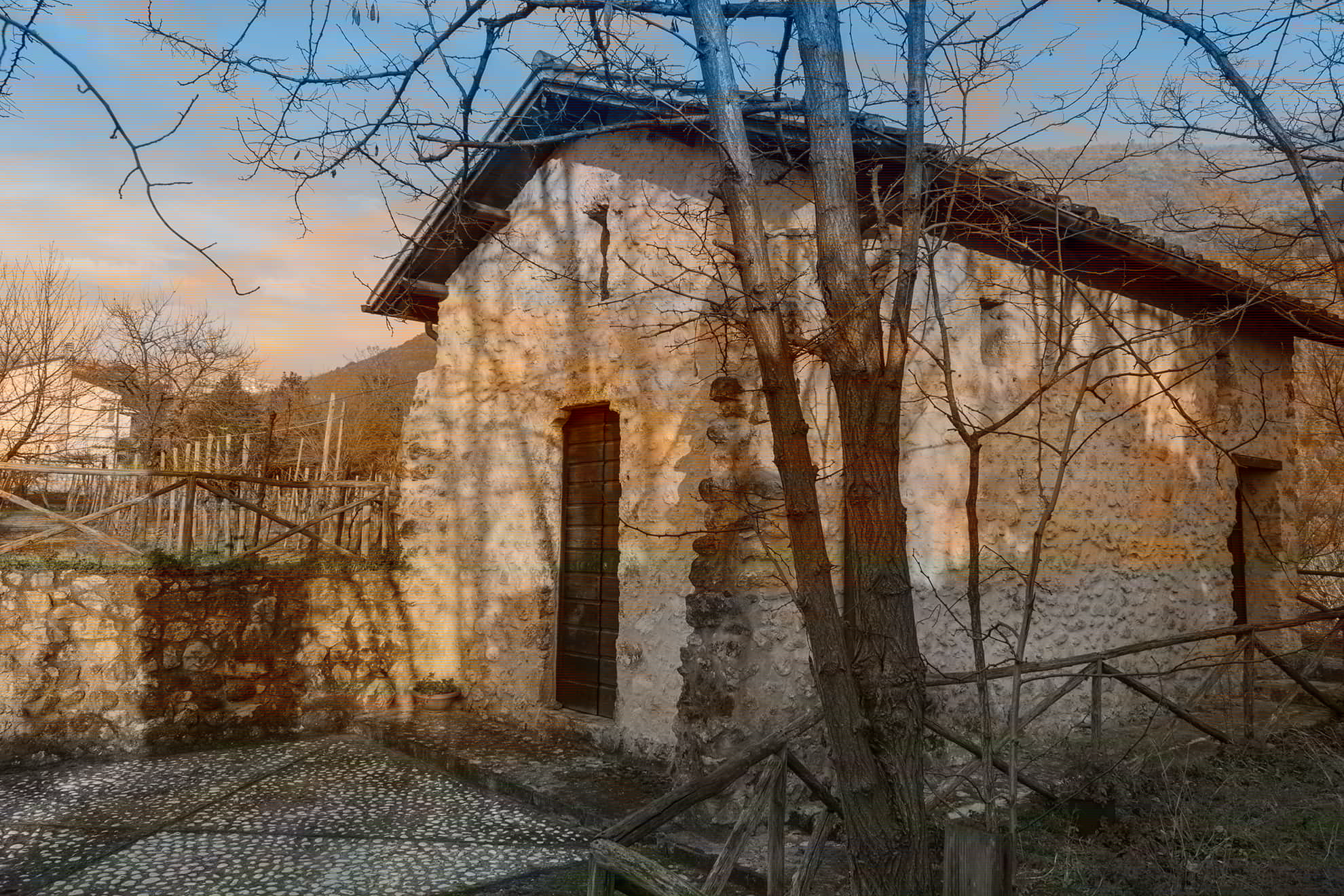